What's Going On In OIE 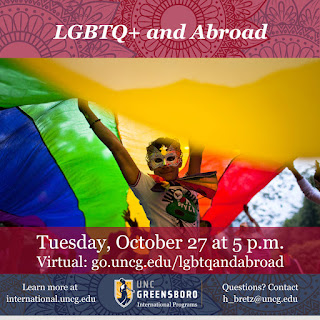 If you've studied abroad and would like to be a panelist for this event, send an email to OIE Assistant Director Elliott Kimball. 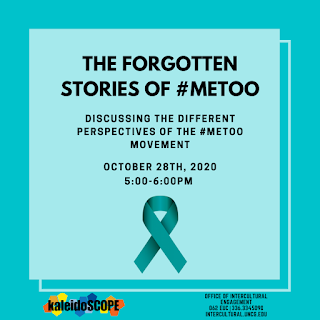 The Forgotten Stories of #METOO 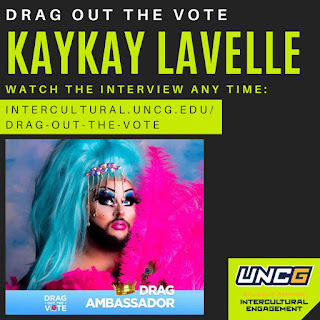 When: anytime
Where: Join the OIE’s Ryan McKeel as they interview KayKay Lavelle about the upcoming election. KayKay is a local drag queen and activist who’s been working with Drag Out The Vote! 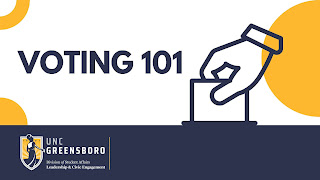 OLCE Voting Information page: https://olce.uncg.edu/students/voting/
Our site includes information on election dates and deadlines, registering to vote (and how to check if/where you are registered), registering with an on-campus address, how to vote early in-person, as well as FAQs.
Voter Registration Drive: Thursday, Oct. 8th (tomorrow!!) there will be two outdoor registration stations from 11am-2pm, one outside of Moran Commons (outside the caf) and one on College Ave.
One-Stop Voting Sites: for those who want to vote in-person early, you can only vote at sites in the county you are registered in.  Find those sites by county here: https://vt.ncsbe.gov/ossite/
TurboVote: https://uncg.turbovote.org/
UNCG is partnered with TurboVote to offer anyone with a UNCG email an easy online tool to walk them through the registration process -- in whatever home state they are registered.
Also -- follow OLCE on Twitter and Instagram for information on events coming out of our office: @olce_uncg 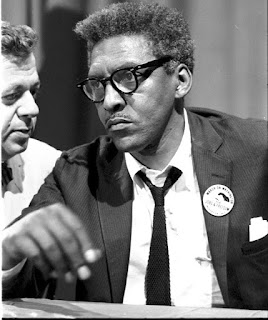 Bayard Rustin was an activist and civil rights movement leader from 1941 until his death in 1987. He was outed as a gay man early in his career, which forced him to become a behind-the-scenes activist. As a member of the AFSC he covertly helped write “Speak Truth to Power…”, a highly influential pacifist essay of the time. Rustin made sure no one knew publicly of his involvement because he thought his sexuality would mar the paper. Similarly, he was a trusted advisor of Martin Luther King Jr. and said himself that he heavily influenced King’s peaceful ideology. "I think it's fair to say that Dr. King's view of non-violent tactics was almost non-existent when the boycott began. In other words, Dr. King was permitting himself and his children and his home to be protected by guns."
Rustin’s orientation would continue to cause him to stay backstage for the labor movement, the Southern Christian Leadership Conference, the March on Washington, and many other historic advocacy projects. Late in his life, Rustin was able to be one of the faces for the LGBTQ+ Movement when he testified on behalf of New York State's Gay Rights Bill. Due to his orientation, he is often forgotten as one of America’s civil rights leaders. However, in 2013 President Barack Obama posthumously awarded Rustin the Presidential Medal of Freedom. 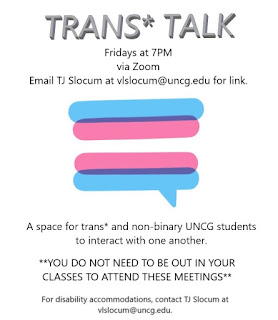 When: Fridays at 7:00pm
Where: via Zoom, email TJ Slocum at vlslocum@uncg.edu for the link.
What: A space for trans* and non-binary UNCG students to interact with one another. You do not need to be out in your classes to attend these meetings. 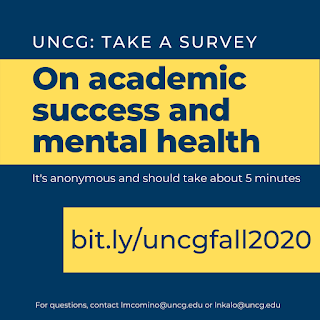 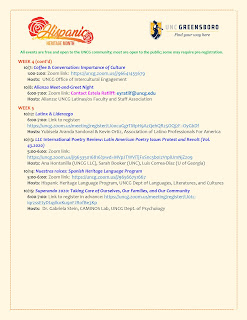 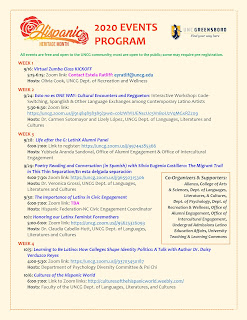 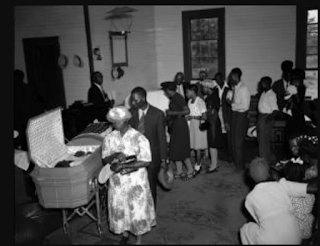 "From 1882-1968, 4,743 lynchings occurred in the United States.  Of those people who were lynched 3,446 were African American (72.7%).  These numbers seem large, but the actual numbers will never be known because not every lynching was recorded.  Out of the 4,743 people lynched only 1,297 white people were lynched (27.3%).  The word "lynching" has been used in many different ways.  James E. Cutler's 1905 study, Lynch Law, posits that it derived its name from Virginia Judge Charles Lynch who reportedly punished Tories during the American Revolution.  Over time, the practice was used to punish horse thieves and cattle wrestlers in the southern and border states.  By the nineteenth century, "lynch law" was used by white supremacists to terrorize African Americans as a means of social control.  While the term is largely symbolized by a hanging noose or rope, lynching is defined as the extra-legal execution of individuals for alleged and conceived crimes.  Victims were accused, abducted, hunted, convicted, shot, stabbed, beaten, dragged, drowned, burned, dismembered, and tortured by deputized posses, or more or less spontaneously by a mob."

Be sure to check it out and let Rhonda know what you think! rdjones3@uncg.edu

Posted by Darinlee at 8:52 AM No comments: 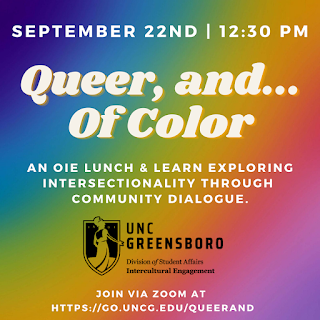 The Office of Intercultural Engagement invites you to the first installment in their virtual Lunch & Learn series titled "Queer, and...!"

Their first panel will feature Queer People of Color, and participants will hear from undergrad and graduate students, faculty, and staff as we explore intersectionality and representation for QPOC.

Where: Join via Zoom at https://go.uncg.edu/queerand

With the help of UNCG community members and leaders from the Greensboro area, “Queer, and…” will explore the countless, various identities within the LGBTQIA2S+ community all in an effort to show that people can be “Queer, and…”

Bring your lunch, and an open mind!

Posted by Darinlee at 1:31 PM No comments:

Want to know more about this awesome month long party? The Library of Congress has you covered!

Also check out our research guides for Anthropology, Sociology, International and Global Studies, as well as Languages, Literatures and Cultures resources that we have here in our own UNCG University Libraries collection!
Posted by Darinlee at 7:00 AM No comments: 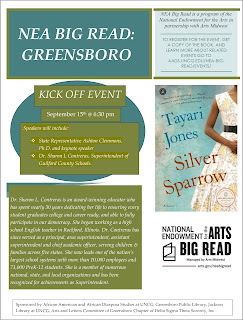 NEA Big Read is a program of the National Endowment for the Arts in partnership with Arts Midwest. Sponsored by African American and African Diaspora Studies at UNCG, Greensboro Public Library, Jackson Library at UNCG, Arts and Letters Committee of Greensboro Chapter of Delta Sigma Theta Sorority, Inc

Dr. Sharon L. Contreras is an award-winning educator who has spent nearly 30 years dedicating her life to ensuring every student graduates college and career ready, and able to fully participate in our democracy. She began working as a high school English teacher in Rockford, Illinois. Dr. Contreras has since served as a principal, area superintendent, assistant superintendent and chief academic officer, serving children & families across five states. She now leads one of the nation’s largest school systems with more than 10,000 employees and 73,000 PreK-12 students. She is a member of numerous national, state, and local organizations and has been recognized for achievements as Superintendent.

TO REGISTER FOR THE EVENT, GET A COPY OF THE BOOK, AND LEARN MORE ABOUT RELATED EVENTS GO TO AADS.UNCG.EDU/NEA-BIGREAD/EVENTS/

Posted by Darinlee at 8:50 AM No comments: 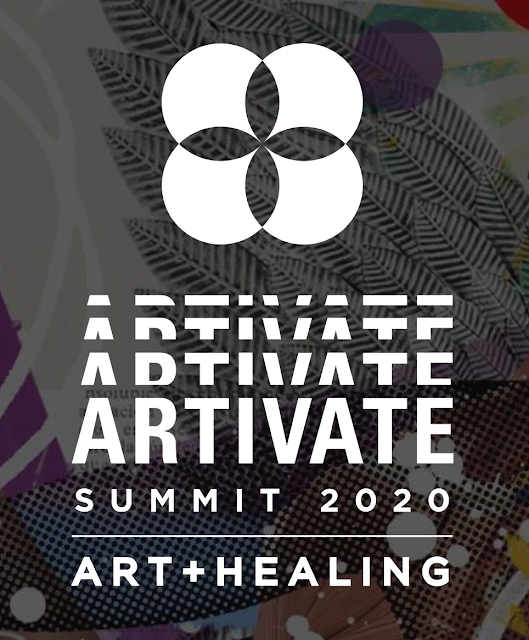 BUILD CONNECTIONS. BE INSPIRED.
EXPLORE HOW ARTISTS + HEALERS ARE FORGING A NEW FUTURE, TOGETHER.

Artivate 2020 will be a practice-based Summit that inspires inquiry around the integration of the arts, science, spirituality and human wellness. The  purpose of the Summit is to acknowledge the divide between arts, science and spirituality, and to propose that practice is a powerful mindset to explore and to renew among a diverse group of innovators and leaders.
Register HERE!
Posted by Darinlee at 8:52 AM 2 comments: